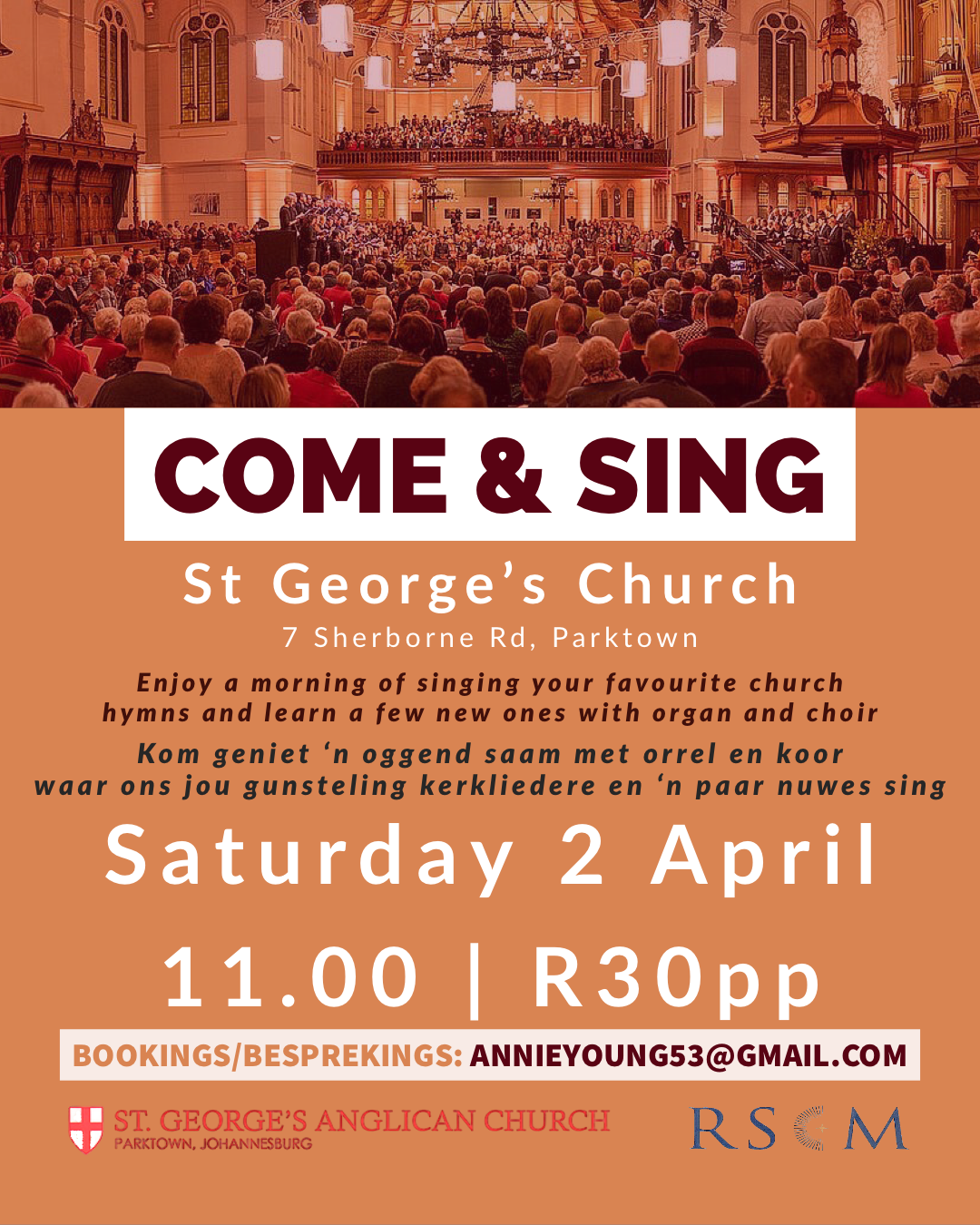 Come and sing your favourite hymns in the beautiful and historic St George’s Parktown,

accompanied by Marnus Greyling on the magnificent Rieger organ.

Whether you have experience singing in a choir, or simply love to sing hymns,

this is a morning for everyone – bring the whole family

Please book by sending an email to annieyoung53@gmail.com

The Royal School of Church Music is an organisation that strives to enrich and protect church music throughout the world.

Proceeds for this event will help the RSCM Northern Branch facilitate more workshops in this regard.

Music plays a vital role in the life and worship of St. George’s Anglican Church, Johannesburg. With the installation of a new Rieger organ in 2012, the music of the church has been greatly uplifted. The church now has an extensive programme of choral music (through its own church choir, and visiting performers) as well as many organ and other instrumental recitals. The primary focus of the music at St.George’s is, of course, the worship of God as part of the living tradition of the Anglican Church.

In the documents below, you will find all the information concerning the music of St. George’s Anglican Church, and we welcome you to join us in our regular acts of worship, as well as the many non-liturgical musical events the church hosts.

Introduction to the music of St. George's Church 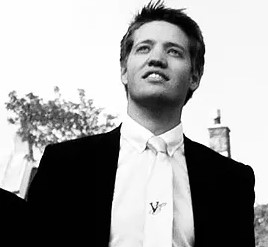 Marnus grew up in Johannesburg, South Africa, and started his first organ studies in Pretoria, in 2009. He received the top prizes in the National organ competitions of SAKOV (Southern African Church Organist Society) for five consecutive years from 2011. In 2012, he completed a Teacher’s Licentiate in piano, was accompanist to the TUKS Camerata (Pretoria University Choir), and won the Pretorium Trust bursary competition. Marnus went on to win
the organ category of the prestigious ATKV Muziq competition in 2015, and was a prizewinning finalist in the overall round of the 2016 competition. He completed a BMus Honours degree cum laude at the University of Pretoria under the supervision of his organ professor, Wim Viljoen.

Marnus has taught at the Deutsche Internationale Schule in Johannesburg, worked as accompanist for the Johannesburg Bach Choir and the Welsh Male Voice Choir of South Africa. He has worked closely with some of the top musicians in South Africa, and also been involved in premiering – on the continent – works by composers such as Jan Dismas Zelenka.

While completing a Master of Music degree in 2017 at Jesus College, University of Cambridge, he performed with the Cambridge University Chamber Choir and Buxtehude Ensemble, and gave other recitals in the colleges of Trinity, Clare, Downing, Selwyn, St Catherine’s and Jesus. He was also Graduate Organ Scholar at Downing College, working closely with the esteemed Christopher Robinson. During his time in the UK, Marnus has toured with Cambridge choirs to Lithuania and Wales, and recently to Sweden with the Abbey Girls Choir of St Albans Cathedral where he was also organist. Having now returned to South Africa, he has been appointed Director of Music at St George’s Church in Parktown, accompanist to The Symphony Choir of Johannesburg and the newly established Studio Chorale in Pretoria.

Introduction
Music plays a vital role in the worship and life of St. George’s Anglican Church, Johannesburg. The musical life of this church is based upon the Anglican Choral tradition, as embodied in the Cathedrals , College Chapels, and larger Choral Foundations of Great Britain.

Our music is devoted to the glory of God in this beautiful church, which is itself one of the most famous architectural landmarks in the city. St. George’s Church is a thriving Christian community which seeks to draw all people into a deeper relationship with God.

The choral repertoire of the Choir ranges from Plainsong to the present day, and is modelled upon the standard Anglican Cathedral repertoire. We perform music by the Tudor masters, Byrd, Tallis, Gibbons, Campion, etc; through the restoration (Purcell, Wise); to eighteenth century composers such as Samuel Webbe, Jonathan Battishill, Samuel Arnold; and thus to the nineteenth century revival under S.S. Wesley, Charles Stanford, John Stainer, and into the twentieth century with Vaughan Williams, Walford Davies, Howells, Britten, Rubbra, Holst, Joubert, and Rutter, amongst others. We strongly support the commissioning and performance of new sacred music from contemporary composers.

The Choir sings a motet at each 9.00 Sunday morning Eucharist, as well as a Mass setting (in which the congregation will also usually sing).

On the first Sunday of the month, there will be full Choral Evensong, from the Book of Common Prayer, at 6.00pm, in which the Choir will sing an Introit, Psalm (to Anglican Chant), Responses, Evening Canticles, and an anthem.

During Lent, the Choir will also sing at the service of Sung Compline (which takes place at 6.00pm on each Sunday in Lent, other than the first Sunday of the month, when there is Choral Evensong as detailed above). During Sung Compline, the Choir will sing a setting of the Nunc Dimittis, a Psalm (to Anglican Chant), and a short anthem.

The Choir will also sing at the service of Holy Eucharist on Ash Wednesday and Maundy Thursday.

Generally speaking, when there is a fifth Sunday in the month, the 9.00 Sunday morning Mass will be a Choral Holy Communion Service from the Book of Common Prayer, and the Choir will sing a setting of the Holy Communion and a motet.

The Choir of St. George’s also performs a Choral Concert, generally once a year. In 2013 we performed the Requiem by Gabriel Fauré with a quartet of visiting soloists from the Royal Academy of Music in London. In 2014, we performed the Gloria by Antonio Vivaldi, and the Short Requiem by Henry Walford Davies, also with visiting
soloists.

St. George’s is very active in supporting the work of the Royal School of Church Music, and frequently hosts choral and organ workshops, such as those given by Simon Lindley (Director of Music at Leeds Minster in England) in October 2014.

Given the importance of the new organ (see below) and the ambience of St. George’s, a number of instrumental concerts are generally hosted each year by visiting instrumental ensembles.

In December 2014, the St. George’s Chamber Choir was formed, with ten singers. This group gave a concert in aid of the Turning Point Home for Boys, a charity which is closely supported by the church and congregation at St. George’s. The programme comprised Advent Music by Contemporary Composers, and included three works
receiving their world premières.

The Organ
As a result of a very generous benefaction, St. George’s had a new two manual Rieger organ installed in 2012 at the West end of the church.

The primary purpose of the organ is to accompany the musical worship of the church. Since its installation, the organ has led to a significant expansion of the quality and quantity of Choral music being performed at the church (see Choral Music, above). It is also, of course, a magnificent solo instrument, in which capacity it can be heard
after every service in an Organ Voluntary.

We also have a number of Organ recital series which serve to provide a basis for enjoyment of the new instrument for the congregation and visitors; a platform for younger South African organists to perform in public; and an opportunity for worldclass celebrity organists to come to South Africa and play.

Thus, before Choral Evensong on the first Sunday of every month (apart from January), there is a 30 minute recital (the so-called ‘Evensong’ Recital) given by a local organist. These recitals are free of charge. Those who have performed in this series include many excellent students of the instrument, as well as a number of the
top professional players in the Johannesburg and Pretoria region.

In addition to the Evensong Recital Series, we occasionally have additional organ concerts on a Saturday lunchtime or afternoon, given by visiting South African organists.

The Celebrity Organ Recital Series usually mounts two or three concerts a year, in which a visiting, world-class, organist will be invited to play at St. George’s. These events include wine and cheese after the recitals, and there is a ticket charge (currently R175 per head). Such luminaries as Olivier Latry, Clive Driskill-Smith, John Scott, Simon Lindley, and Martin Haselboeck have played to packed houses in this series.


RIEGER ON THE REEF ORGAN
A magnificent custom-made Reiger organ was installed in 2012 after many years of planning. The donors, Nicky and Strilli Oppenheimer generously made this instrument available, not only to enrich and enhance our worship, but to function as a performance instrument for international and local recitalists. We have since been privileged to host a number of the world’s top organists at full-house performances and we are also gla to host monthly recitals before evensong of our best local organists. 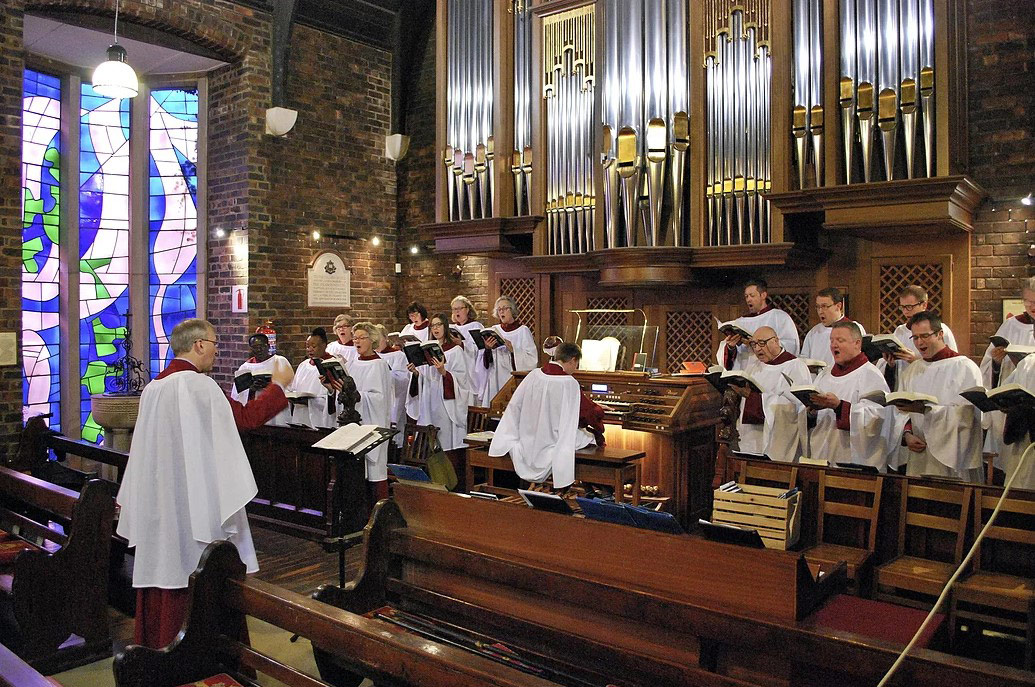 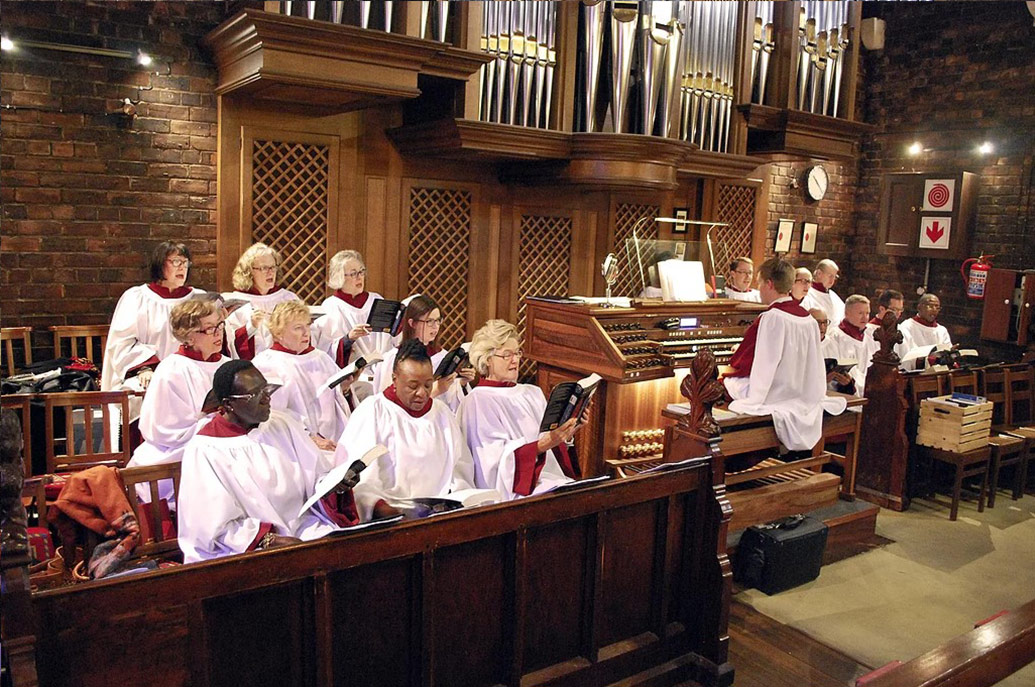 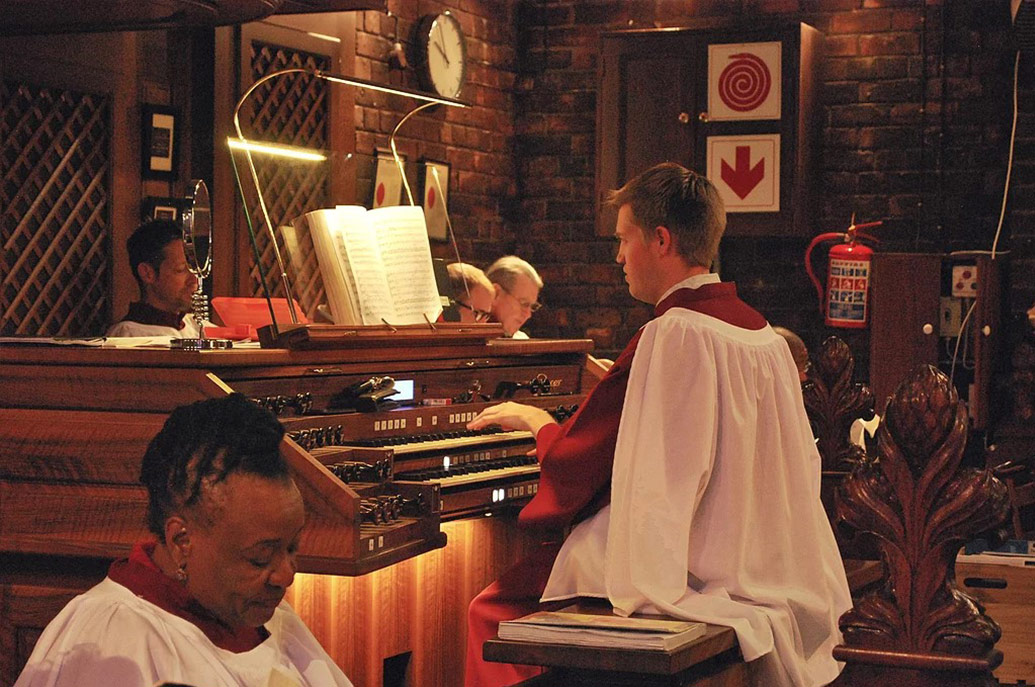 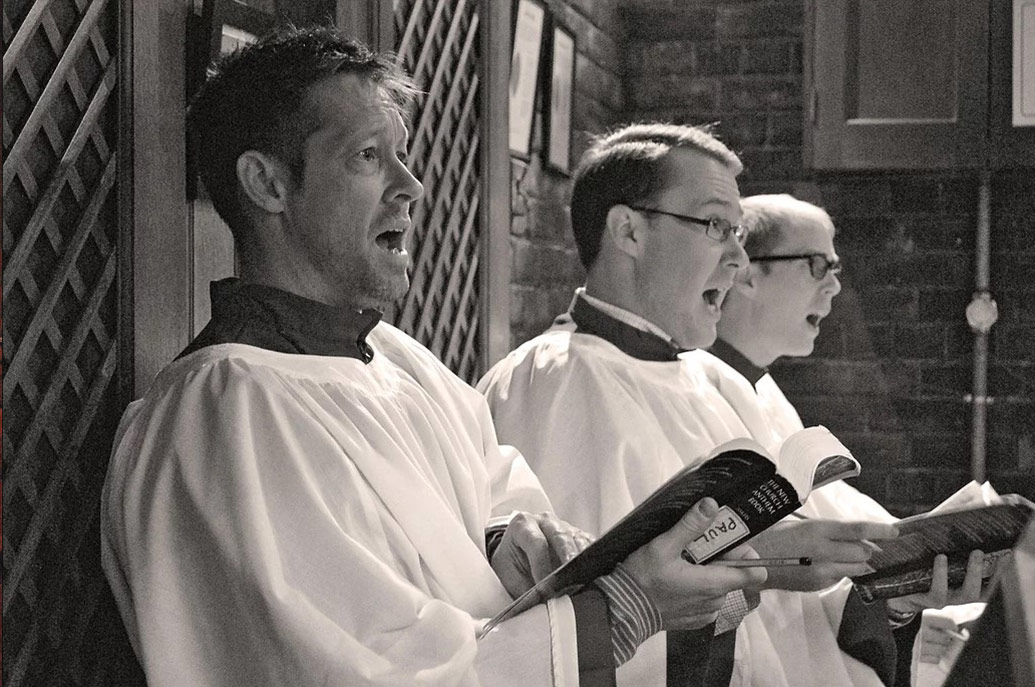